The Symptoms of Sweet Itch

Sweet Itch, or Summer Seasonal Recurrent Dermatitis (SSRD), is a problem that affects thousands of horses, ponies and donkeys in many countries of the world to a greater or lesser degree. Virtually all breeds and types of ponies and horses can be affected, from tiny Shetland ponies to heavyweight draught horses, although the condition is rare in English Thoroughbreds. In South Australia reports say that as many as 60% of horses and ponies are affected. About 5% of the UK horse population are thought to suffer. Although known by different names (e.g. Sommer Ekzem in Germany, Kasen in Japan, Queensland Itch in Australia), the symptoms are the same.

The top of the tail and the mane are most commonly affected. The neck, withers, hips, ears and forehead, and in more severe cases, the mid-line of the belly, the saddle area, the sides of the head, the sheath or udder and the legs may also suffer.

The animal may swish its tail vigorously, roll frequently and attempt to scratch on anything within reach. It may pace endlessly and seek excessive mutual grooming from field companions. When kept behind electric fencing with nothing on which to rub, sufferers may scratch out their mane with their hind feet and bite vigorously at their own tail, flanks and heels. They may drag themselves along the ground to scratch their belly or sit like a dog and propel themselves round to scratch the top of their tail on the ground.

There can be a marked change in temperament – lethargy with frequent yawning and general lack of ‘sparkle’ may occur, or the horse may become impatient and, when ridden, lack concentration. When flying insects are around he may become agitated, with repeated head shaking.

Diagnosis is not usually difficult – the symptoms and its seasonal nature (spring, summer and autumn) are strong indicators. However symptoms can persist well into the winter months, with severely affected cases barely having cleared up before the onslaught starts again the following spring.

Horses that go on to develop Sweet Itch usually show signs of the disease between the ages of one and five and it is common for the symptoms to appear first in the autumn.

There is anecdotal evidence that stress (e.g moving to a new home, sickness, or severe injury) can be a factor when mature animals develop Sweet Itch.

Hereditary predisposition is very probably a factor in Sweet Itch and work to identify the gene(s) responsible is at an early stage. However environmental factors play a major part – where the horse is born and where it lives as an adult are at least as significant as the bloodlines of its sire and dam.

Sweet Itch is not contagious, although if conditions are particularly favourable to a high Culicoides midge population, more than one horse in the field may show symptoms.

In the UK, Sweet Itch is classified as an unsoundness and, as such, should be declared when a horse is sold. 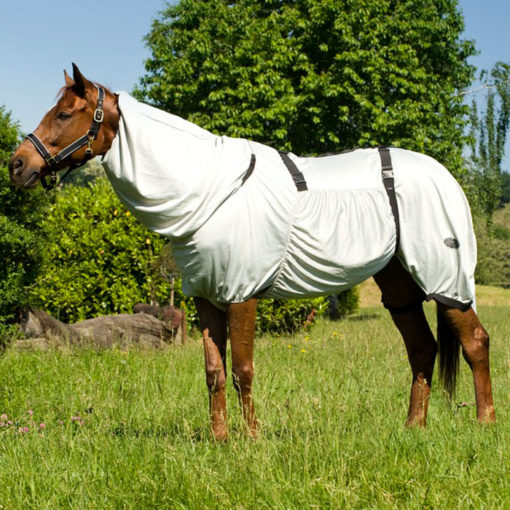 Protect your horse and help keep them stress free with this leading sweet itch sheet from Equi-Theme. Featuring belly straps and fully covered neck to tail sheet to help your horsey when the flies are really biting.

Fly mask sold seperately will help to even further protect your horse from the flies and midges that can irritate them so much during the warmer months of the year.

Matches perfectly with the sweet itch rug to provide complete all-round protection for your horse or pony.

One thought on “The Symptoms of Sweet Itch”